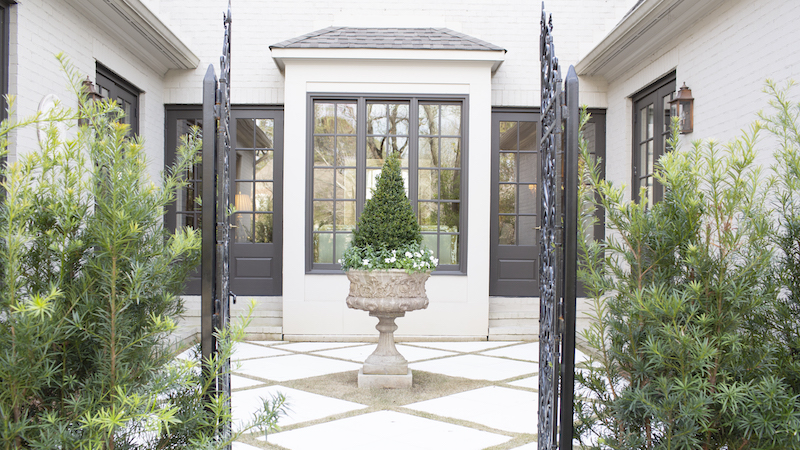 To get the most thorough tour of Holly Lollar’s home, she’ll invite her mom Debby Shepherd to come along with you. When Holly and her husband, Chris, were building their house off Altadena Road just over five years ago, Debby stepped in to offer her expertise as an interior decorator, starting with designing the most central element of the home: the living room.

“Holly really wanted a formal living room that would be used and enjoyed. By designing the living room to be the center of the home, family and guests enjoy it more,” Debby notes. Holly also requested that the windows be placed where you could see from the entrance all the way through to the back courtyard. “I have always liked home designs where you can see straight through the house, enjoy greenery and see your kids playing outside,” Holly adds.

For it and most other rooms in the house’s walls were planned to accommodate French antique artwork and furnishings Holly had already purchased—a step Holly says she wouldn’t have thought to taken on her own. They also decided to paint all of the interior rooms Benjamin Moore Elmira White, creating a neutral blank canvas that has allowed Holly to go back and add bits of color and wallpaper in later years. 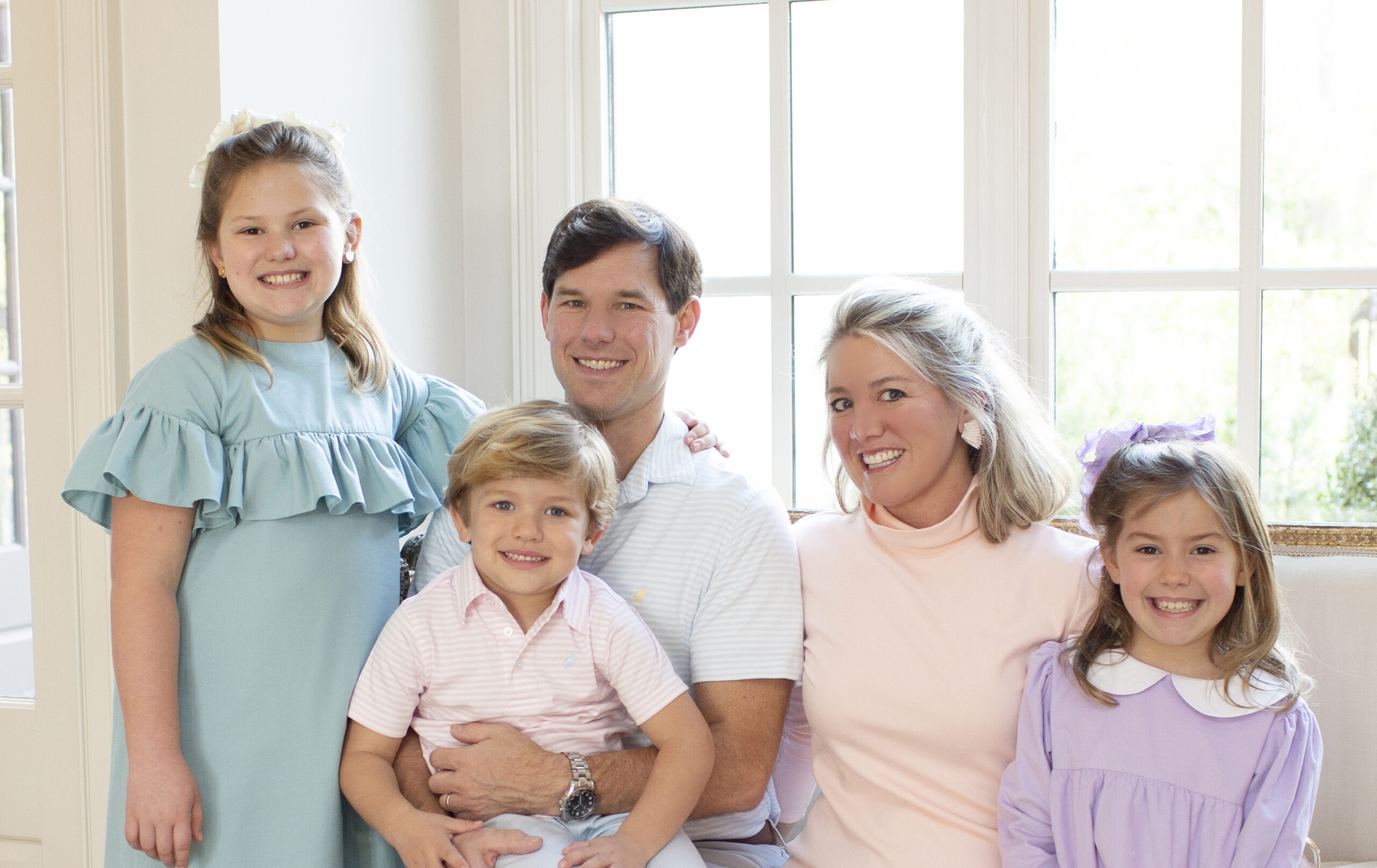 When it came to the entrance of the home, Holly envisioned black iron accents both on the exterior and to make a statement with the foyer stairway. Working with Allen Iron Works in Tarrant, they created a custom railing for the staircase and put finishing touches on another piece Holly found at an estate sale for the exterior.

This home was designed with entertaining in mind too. French doors in the living room and family room allow guests to spill out into the elegant courtyard designed by Faulkner Gardens. Holly also enjoys the small French walled garden outside her kitchen window to welcome guests to the less formal side entrance of the house.

The Lollars decided to save the exterior projects for later, taking the time to create them after getting a better feel for living in the home. All in all, it’s no doubt a home and yard where family memories will be made for years to come. 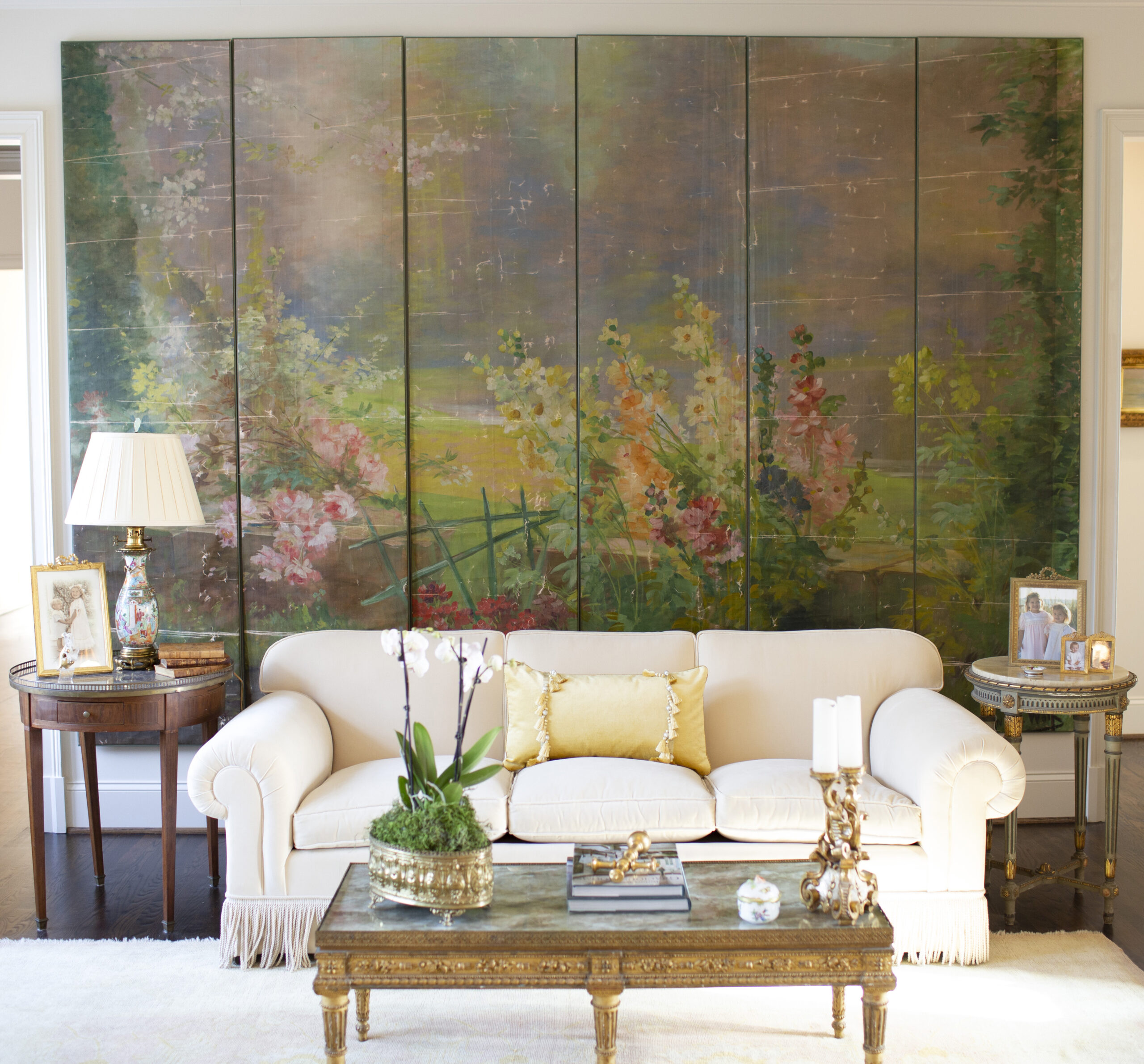 Holly and Debby designed this open living space in the center of the house around this colorful six-panel screen that came from wall panels of a home in France. 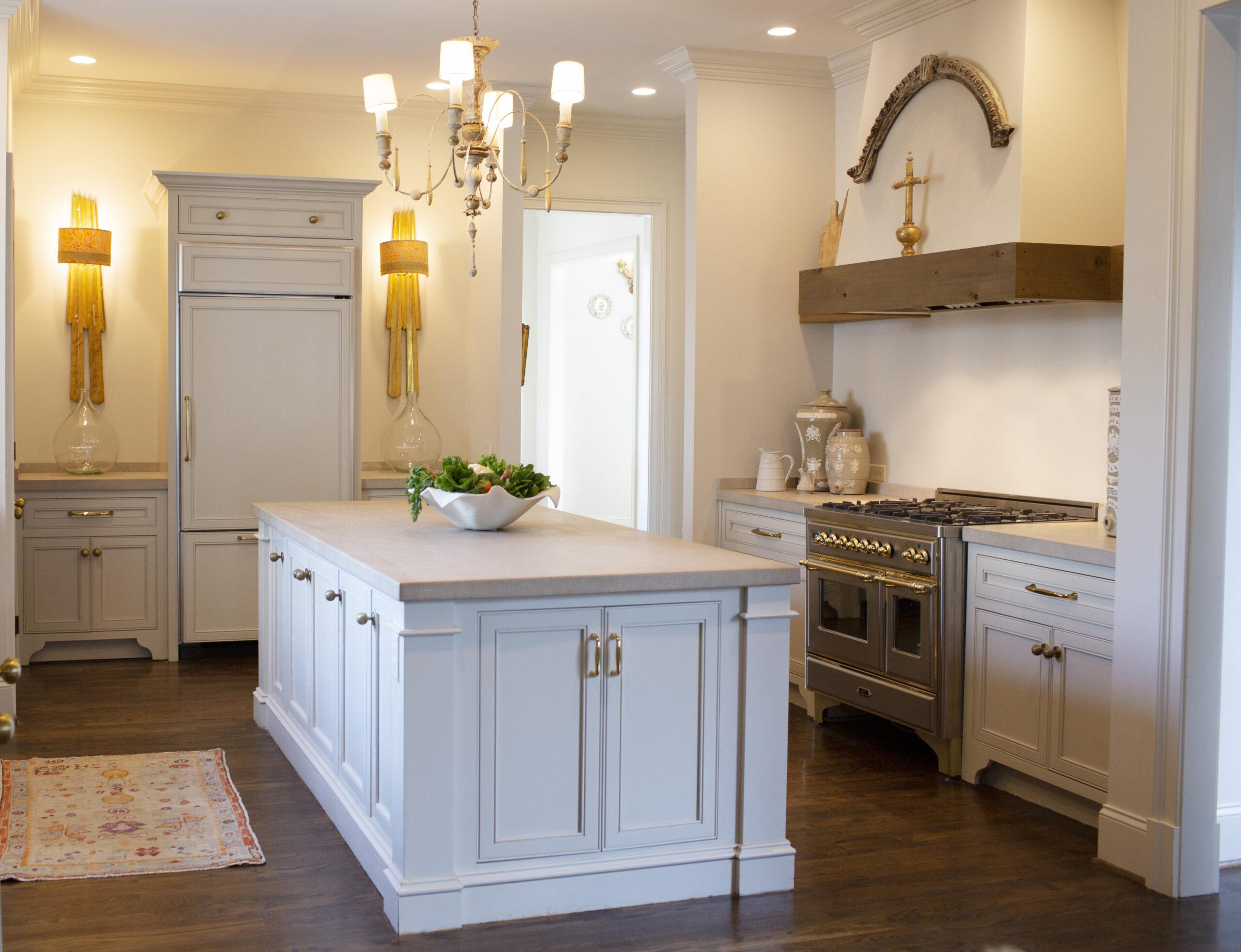 Because the kitchen flows into the den, Holly wanted architectural elements with an old-world feel used in place of upper cabinets. This also created a consistent flow with her neutral-colored cabinets and Alabama limestone countertops. Across from the European style stove she found on eBay hang relics from a European church that she discovered while on a shopping trip to High Point, North Carolina. Holly also used antique doors from Scott Antique Market in Atlanta to close off her pantry spaces. 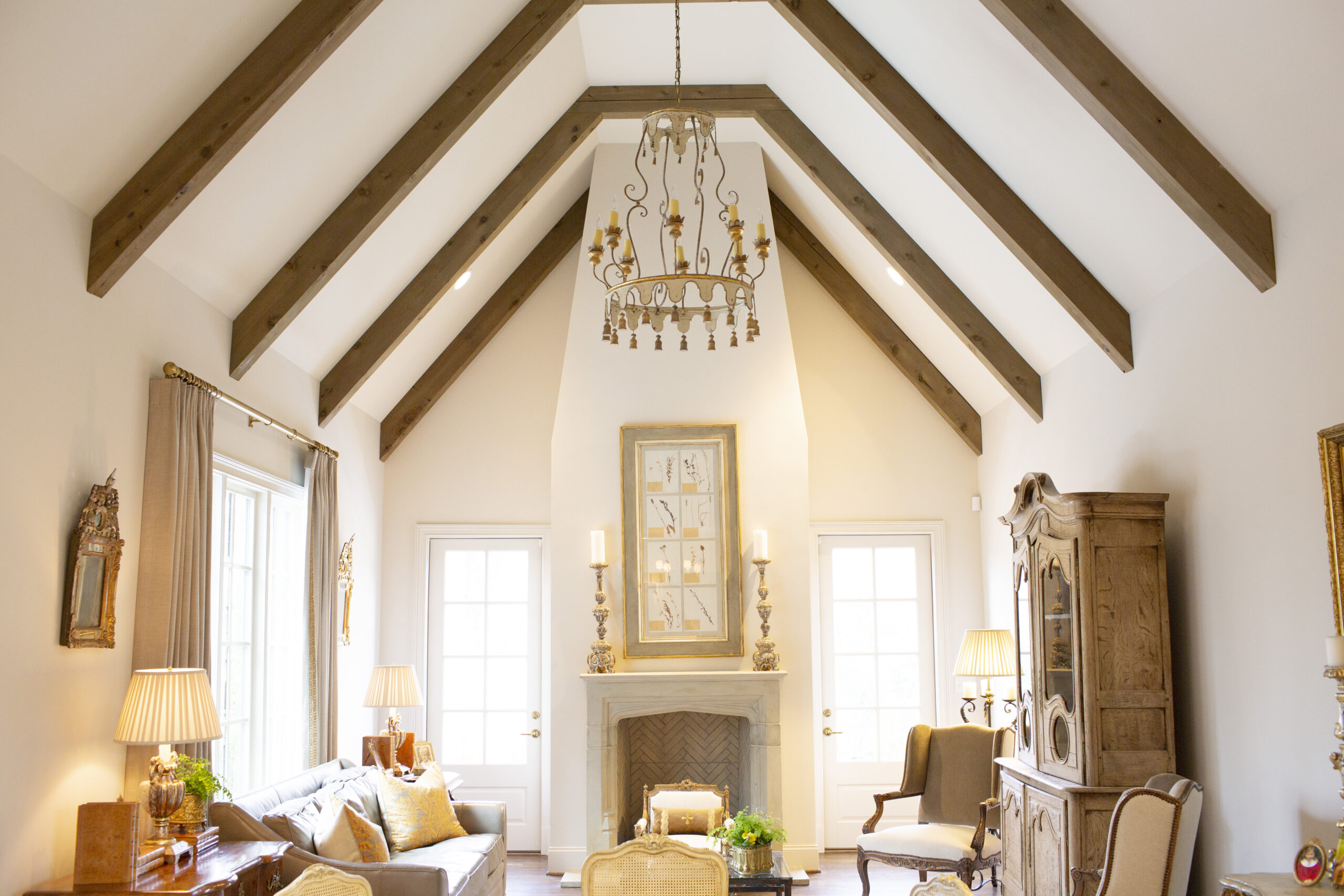 The statement maker of this space off the kitchen is its high vaulted ceiling with distressed light washed beams. Above the limestone fireplace mantle from Architectural Accents in Atlanta hang framed antique pressed flowers and herbs, and glass doors on either side of the room overlook the backyard pool. 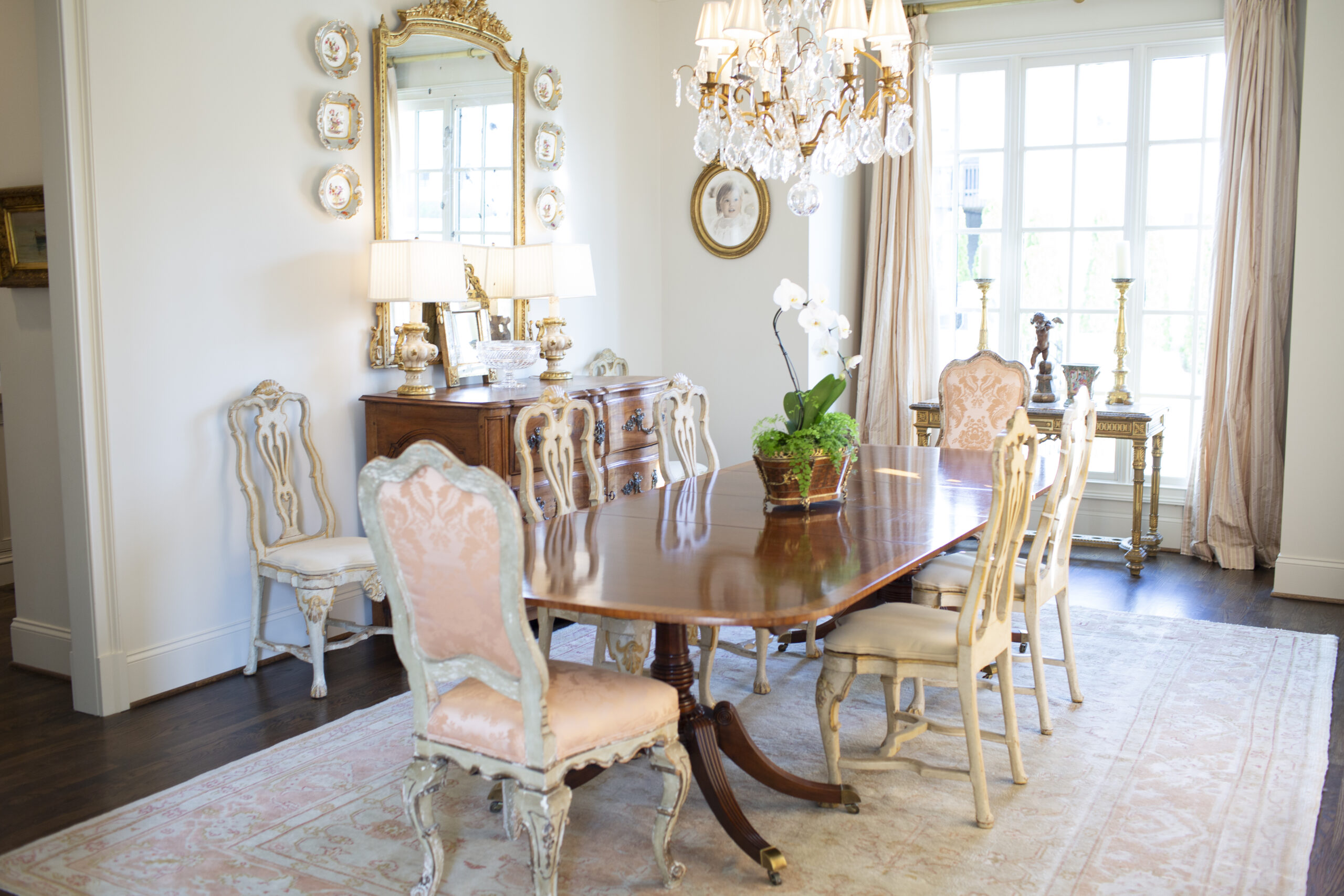 For this elegant space, Holly had antique dining room chairs rebuilt after she chose them for their design and painted finish. She later added a pair of complementary chairs at each end of the table in a different fabric to bring more peach into the color scheme. For the walls she first found three antiques frames and then commissioned Barbara Harbin to create portraits of children to complement the frames. 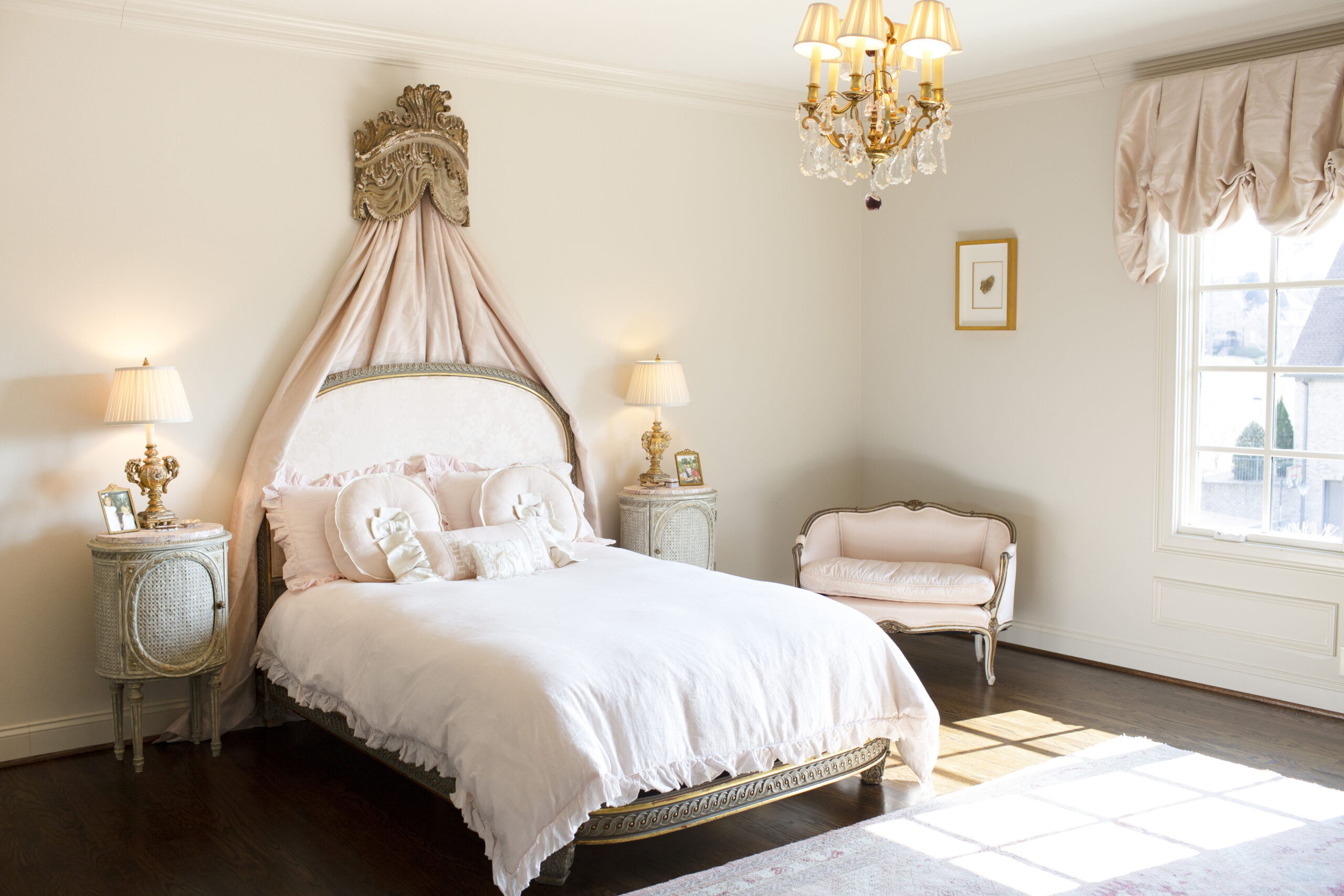 An antique corona from Maison de France Antiques adds height to this antique French bed. It coordinates with the bed’s painted finish, complete with ballet pink silk drapery fabric and linen bedspread. Like all the bedrooms in the home, this bed is a French antique from the 1800s, so the Lollars had a custom-size mattress made for it by Ensley Fairfield Mattress Co. in Homewood. 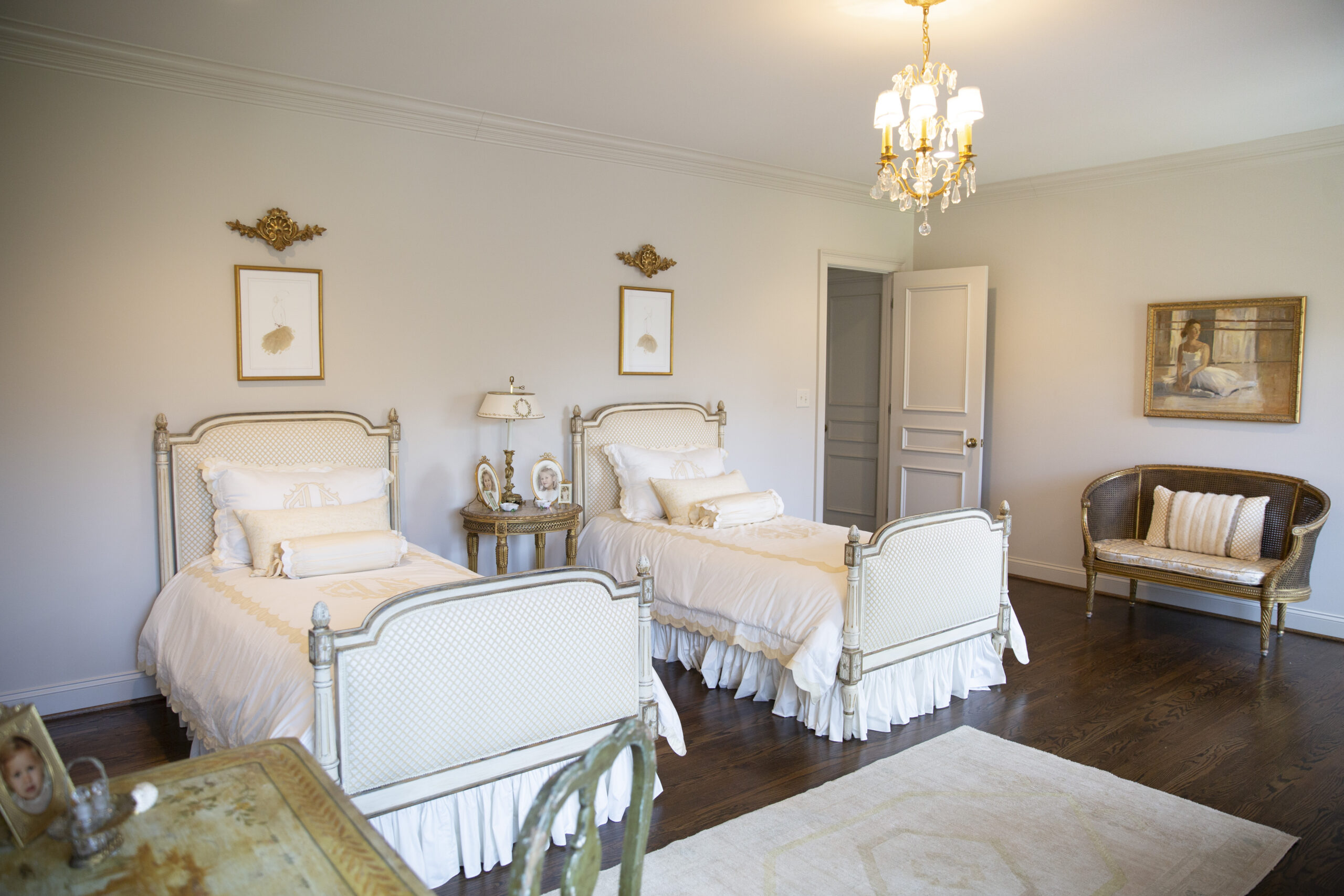 Holly’s oldest daughter is a ballerina, so Holly commissioned artwork featuring ballerinas in creams and golds from Mobile artist Danielle Faircloth. She had the monogrammed bedding custom made for the antique twin beds and added fortuny pillows from Splendor Collections. 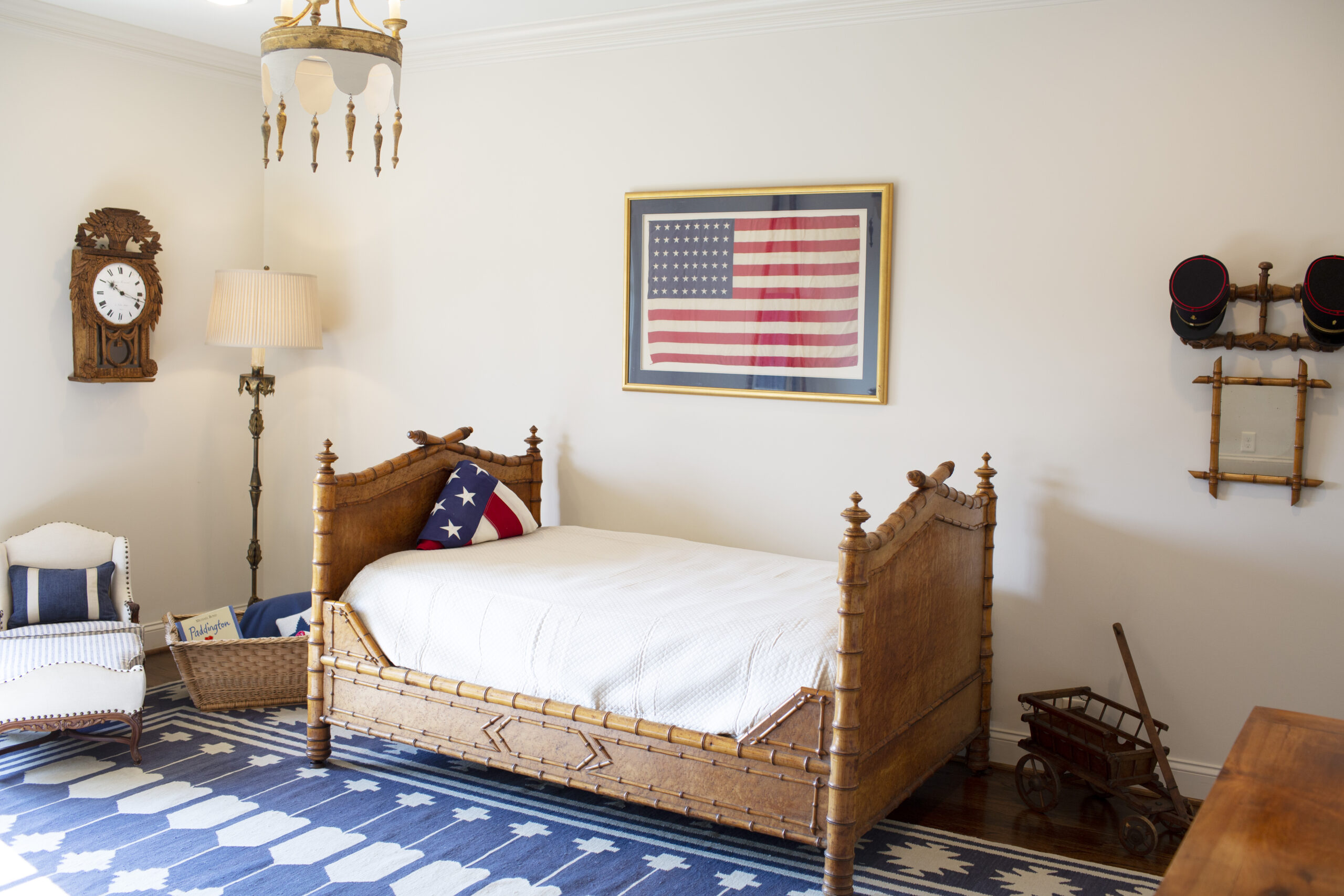 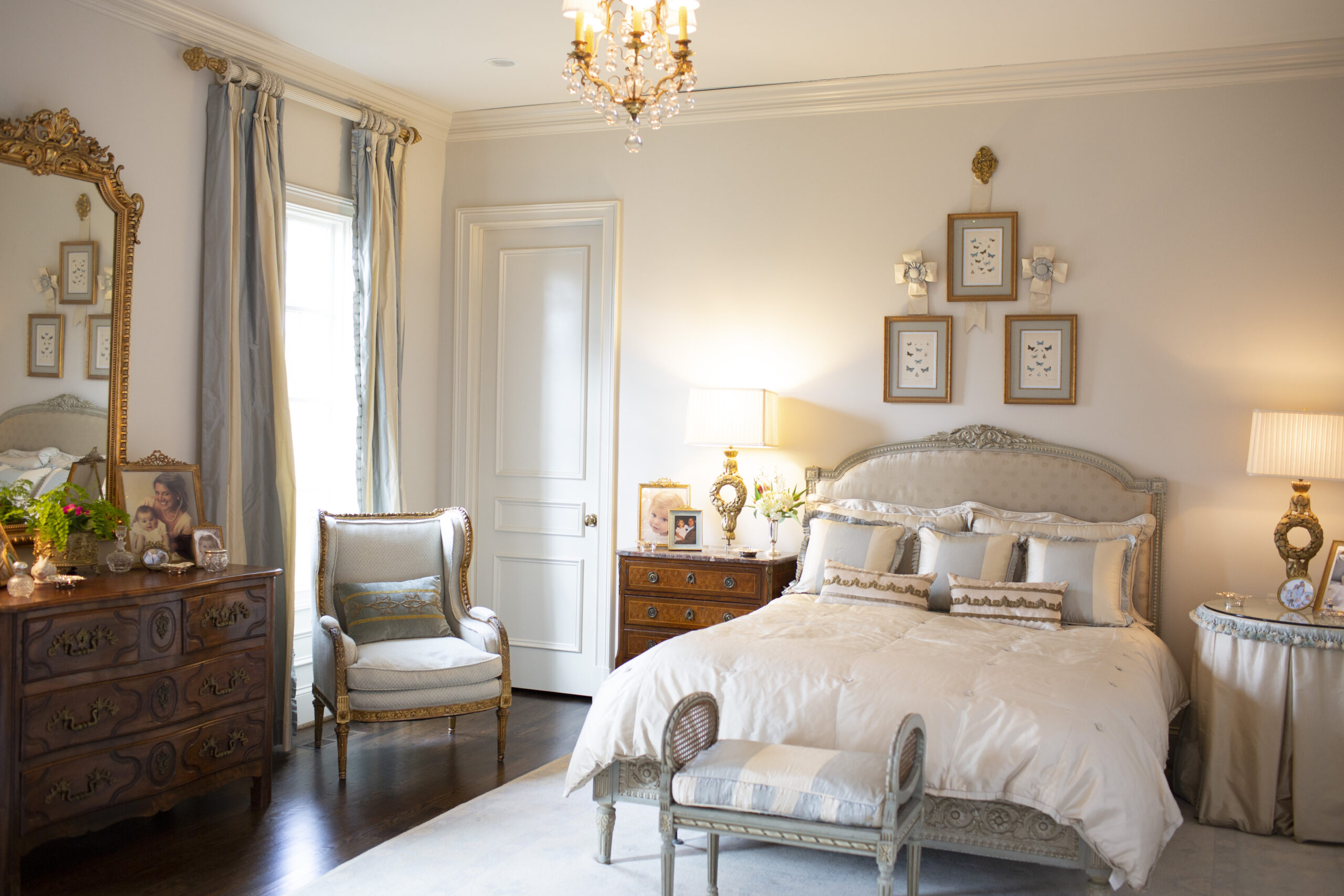 When Holly was in her 20s, Debby provided advice to focus on decorating one room at a time. To begin, Holly saved to buy special pieces for her bedroom during the first few years she was married. She says she still loves the antique French bed and other pieces from Maison de France in Leeds as much now as when she first purchased them almost 20 years ago. 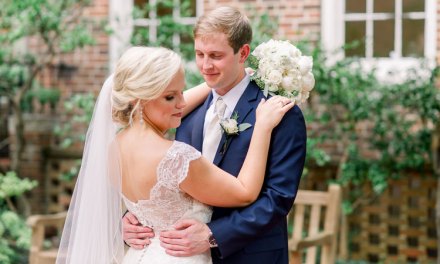 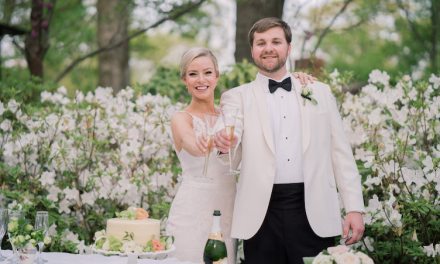 Among the Blooms: A Quarantine Wedding 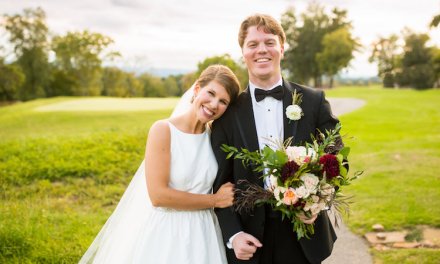 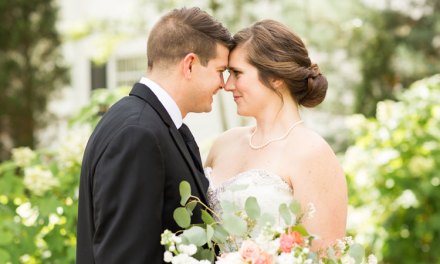