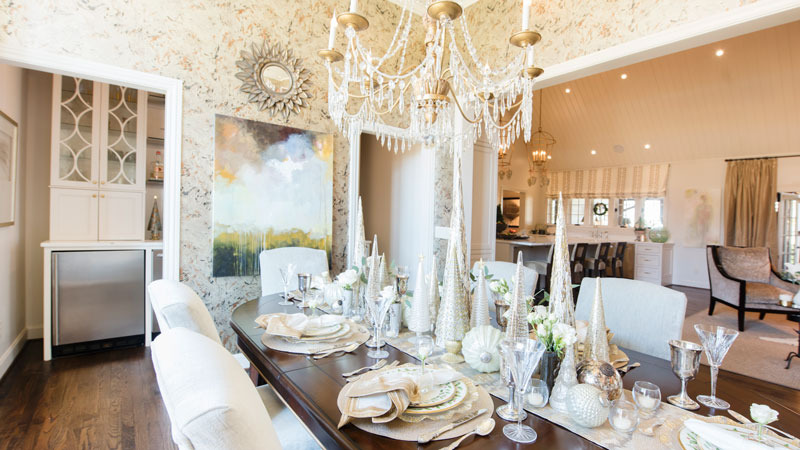 How does a 1950s ranch house become an English-style cottage? Answer: with many years to dream. When Ashley and Andy Prewitt first bought their three-bedroom home on the Vestavia Country Club golf course in 2003, they saw what it could be—and then spent more than a decade living in it and dreaming, saving off photos of styles they liked. “We kept coming back to the English style,” Ashley recalls. “I loved the gables and exaggerated pitch elements now incorporated on the front.”

So that’s just what they did when they started construction in 2016. They raised the roof up to create more pitch and elevated the ceilings to 19 vaulted feet in the living room and kitchen and 12 feet throughout the rest of the house, letting in more light from windows and allowing for better views of the golf course too. With those changes came additional architectural elements such as a large limestone-framed window, a cedar shake roof and a cross built into the brick façade on the exterior to create the English look they were looking for while also staying within the scale and style of the neighborhood. A landscape design of English boxwoods and gardens complete the look too.

Inside they reworked the flow of the house. The kitchen at the front of the house moved to the back to create on open space with the living area, and the dining room moved to the front. On the back of the house they added a large master bathroom and closet and reworked the hallways so the master has its own vestibule entrance while the two guest rooms share a separate and enlarged entry hall.

The couple and their two Labradors moved back into a drastically different home in 2017 with a long punch-list of final details and décor to wrap up, so showcasing it in the 2018 Legacy League Christmas Home Tour made for a good excuse to get the details just how they wanted it—just in time for them to enjoy it for the holidays themselves.

Ashley worked with her interior designer Mark Kennamer to dream up a holiday aesthetic of greenery and creams and whites instead of the traditional Christmas red and green. Neutral colored ribbons softened up the décor and metallic touches gave it a modern set of pizazz—the perfect finishing touches for the Prewitts’ English cottage-style home.

An antique glass chandelier and a calming painting by Kristin Blakeney punctuates the metallic Osborne and Little wallcovering in this elegant room, along with another painting by Ashley’s uncle that pulls from the aqua color in the lamps. They also added a butler’s pantry/wet bar off the dining room to use for entertaining with additional prep area and storage. 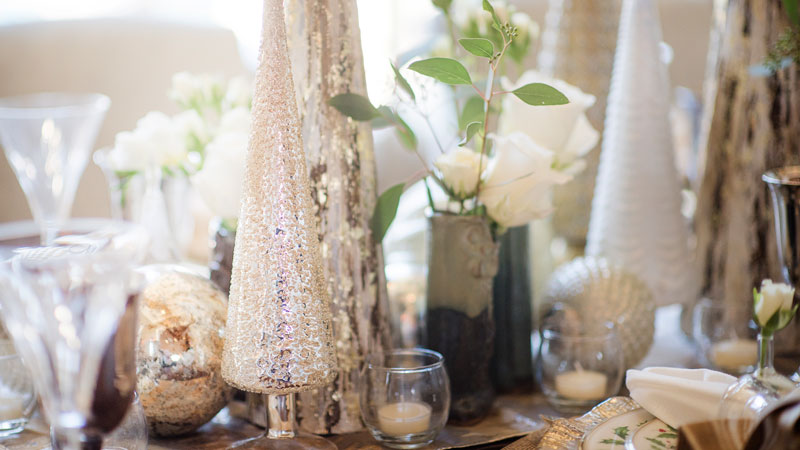 For the Holiday Home Tour Ashley wanted to use her mom’s Christmas china and silver goblets that were a wedding gift from her parents to Ashley and Andy, and she and Mark incorporated the more rustic look of Earthborn Pottery vases filled with white roses, and trendy gold, silver and mercury glass trees and glass balls. 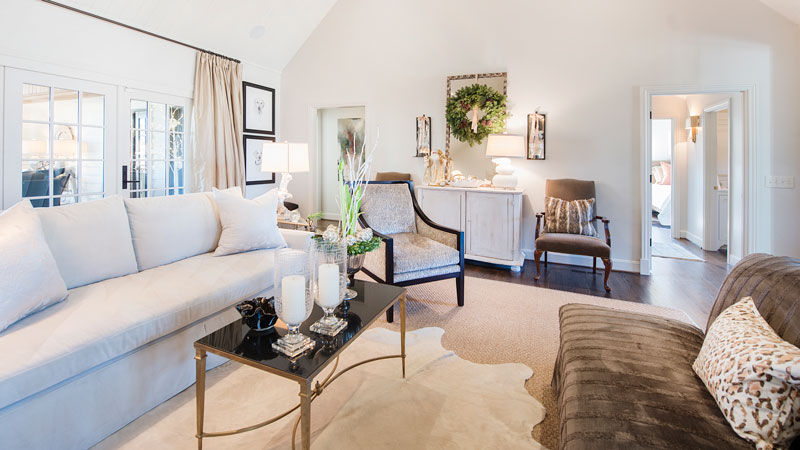 The Prewitts wanted their living room to be somewhat formal but very open and with a family area feel that would be ripe for entertaining. The back of the room features a set of four doors that fully open onto each other, allowing the living room to flow right into the porch, creating an even larger living space. For the holidays Ashley incorporated fresh greenery, white roses, amaryllis, paper-whites and heirloom silver pieces into the space’s cream and white aesthetic too. 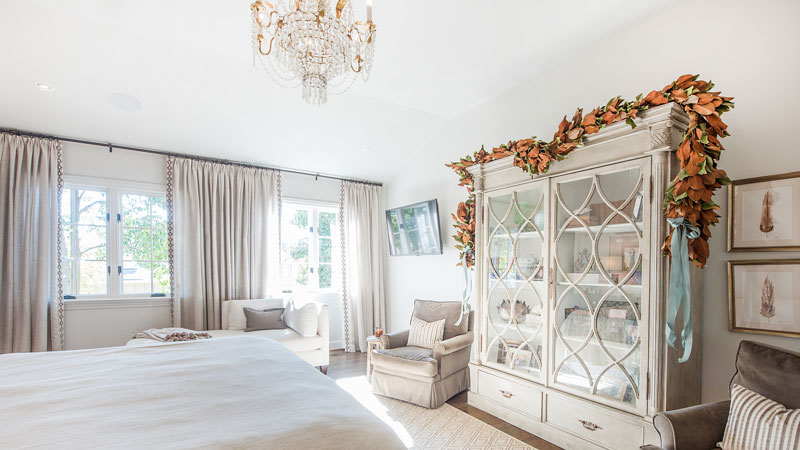 A simple eucalyptus wreath on the headboard and a garland of magnolia leaves draped on an adjacent piece add a touch of holiday to creams and tans in this spacious bedroom. Most of the room stayed the same in renovations, but the addition of a large closet and bathroom and its new private entrance have made it into more of a retreat—complete with French doors that open to the screened-in porch and a corner of windows in the bathroom, which frame the soaking tub and open up the golf course views. 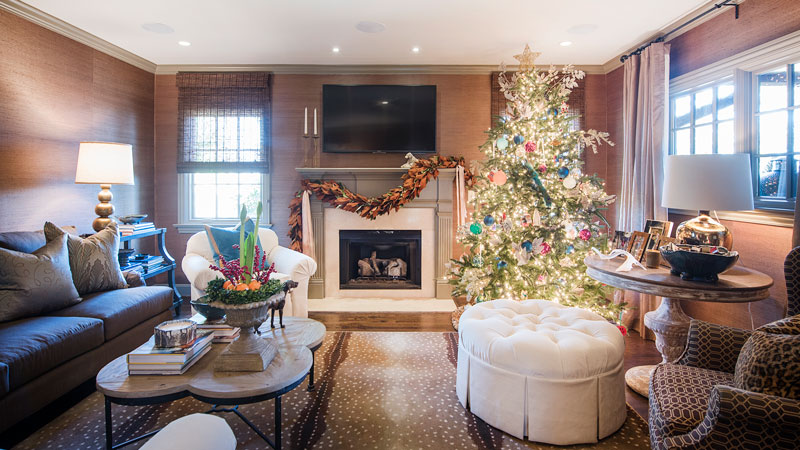 When the Prewitts first bought their house in 2003, they turned the fourth bedroom into a true den, now adjacent to a new powder room and laundry room. With its bronze, grass-cloth wallpaper walls, it’s a cozy spot to enjoy a fire, especially when they set up their Christmas tree. 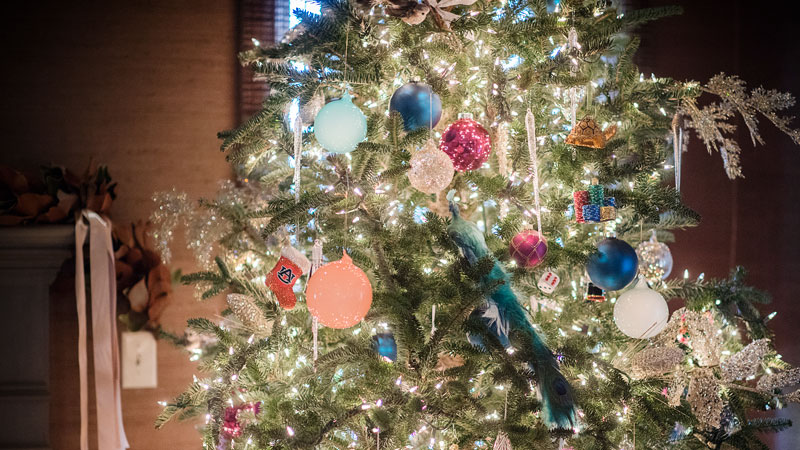 Glass ornaments from Table Matters add a whimsical splash of color to the tree along with a modern metallic look from faux branches and pine cones and sentimental ornaments from Ashley’s mom’s collection. 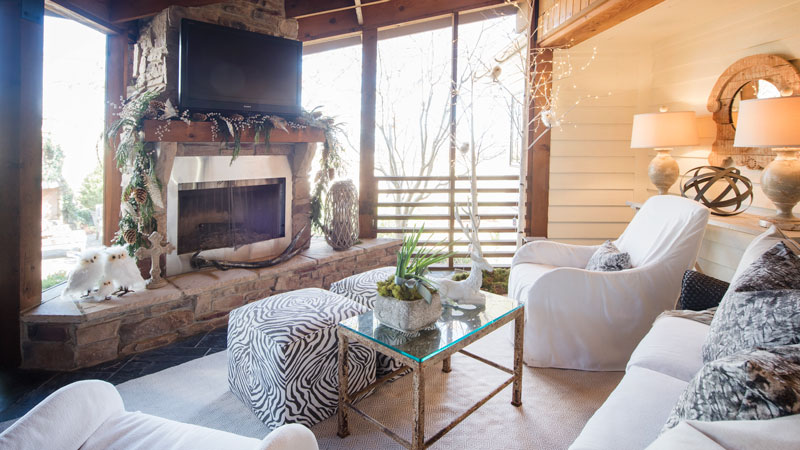 The Prewitts added their screened-in porch onto their house after they adopted their 6-year-old Labradors Camper and Ivey, and the fireplace, which is dressed up with a more ornate fresh garland with metallic pine and white berries, enables them to use it all year round. 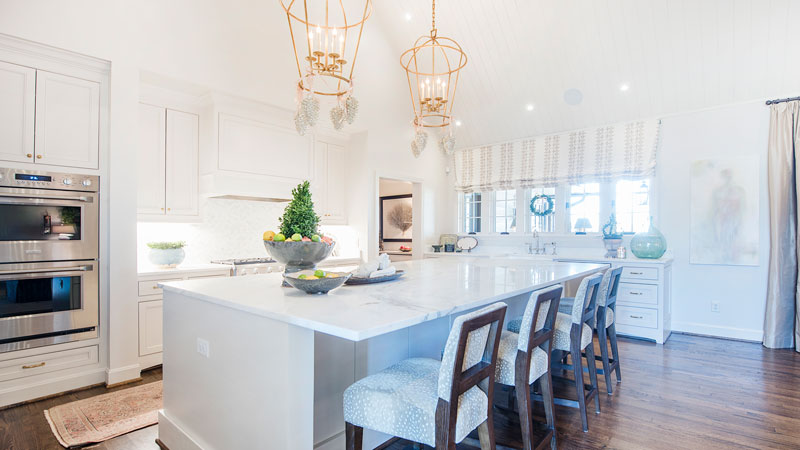 A large kitchen island was on the Prewitts’ wish list—and that’s just what they got with plenty of storage on both of its sides to boot. The kitchen also features Carrera marble countertops, a grey herringbone tile backsplash and two oversized light fixtures that were perfect for hanging platinum pinecones for Christmas. 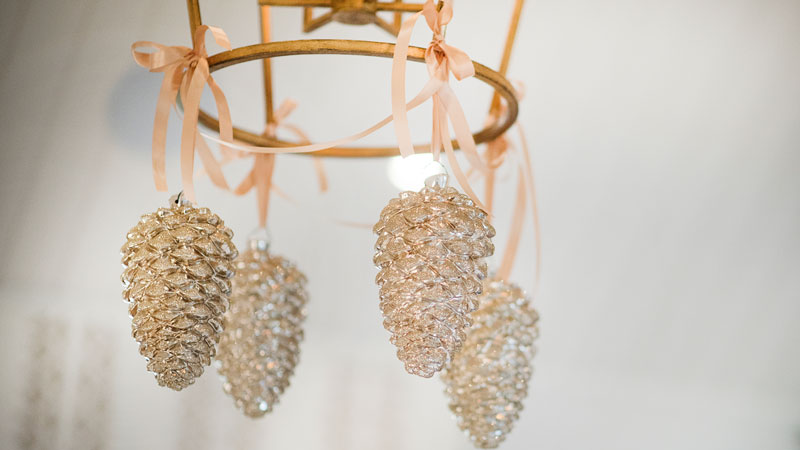 A while back Ashley heard a Samford University Legacy League scholarship recipient speak about the challenges that kept her from setting her sights on college and the impact her scholarship had on achieving that dream. “It touched me so much,” she recalls, “I was in awe of the Legacy League and the lives they touch.” So when a friend involved with the league asked her to allow her home to be on the tour, Ashley had extra reason to say yes. 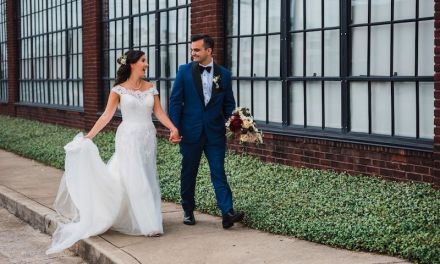 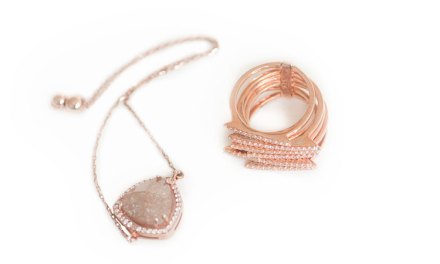 Don’t Blush—Wear it into Fall! 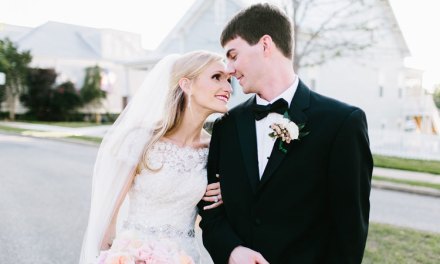 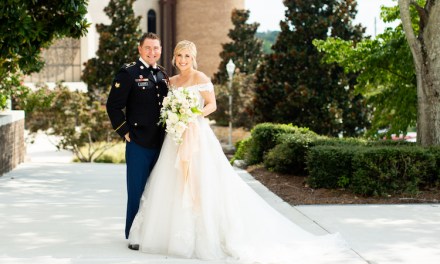