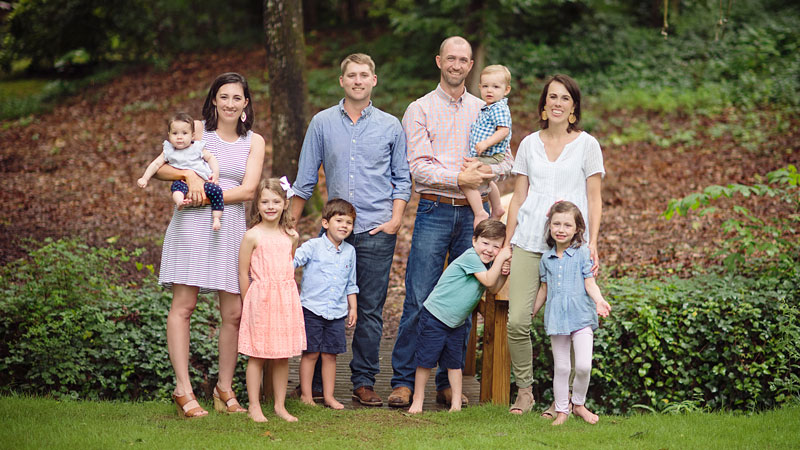 As twin sisters growing up in Liberty Park, there was not much that Jennifer and Sarah Hale didn’t share: a birthday, a school, clothes, a car. As it became time for college though, the sisters’ paths diverged when they decided to attend separate universities. Jennifer then married Joe Fante, an Auburn architecture school classmate and steady companion throughout, and moved to Raleigh. Sarah married her Furman sweetheart, Greg Tomlinson, and moved to Nashville. With so many miles separating them, the girls’ childhood dream of a “twin duplex” seemed more like a mirage.

As Jennifer and Joe progressed in their careers, they began discussing plans to start their own design and construction business, but should they move to Nashville to be near Sarah and her family or back to Birmingham, they wondered. Fortunately, the decision became an easy one when Sarah’s husband Greg followed a job opportunity to Birmingham. Shortly thereafter, Jennifer and Joe began making plans for their new business and move back to sweet home Alabama as well. As fate would have it, around the time the Fantes were ready to start house-hunting, a for-sale sign went up in the yard of the home behind the house off Valley Circle the Tomlinsons had moved into a couple years prior.

Would it be crazy, they thought, to live behind one another? And would their husbands be on board? With Greg’s affirmation of it being “a quality of life decision,” the Fantes placed an offer on the house and the rest is history. Today each family has their own neighborhood and homes an eight-minute drive apart, but they share a property line and often dinners too.

Now the inside of both of their 1960s homes have some common threads since the design and construction business Jennifer and Joe had envisioned, j.fante studio, has renovated both. Working within the original footprint of the Fante home, they opened up the floorplan and moved basement stairs from the side wall to the center hallway. Over at the Tomlinsons’ split-level house, they added a master suite above a two-car garage and a screened-in porch. Additionally, both homes now boast open kitchen-living spaces and modern master bathrooms—all bright and white in design.

While Jennifer was the designer behind both, you can see where the twins’ styles diverge too. Jennifer favors a modern aesthetic and clean lines while Sarah is more traditional with a flair for a more rustic, farmhouse look.

Today all of their kids—each twin now has three—run back and forth across the bridge between their backyards. Aunt Sarah’s sloped driveway is perfect for riding anything with wheels, the backyard bridge is always begging to look for fish swimming in Dolly Creek, and Aunt Jen’s tree swing goes impossibly high in the eyes of anyone under 7. During each afternoon reunion, both Sarah and Jennifer are able to reflect on the windy road that eventually brought them right back to where it all began—together in Vestavia. 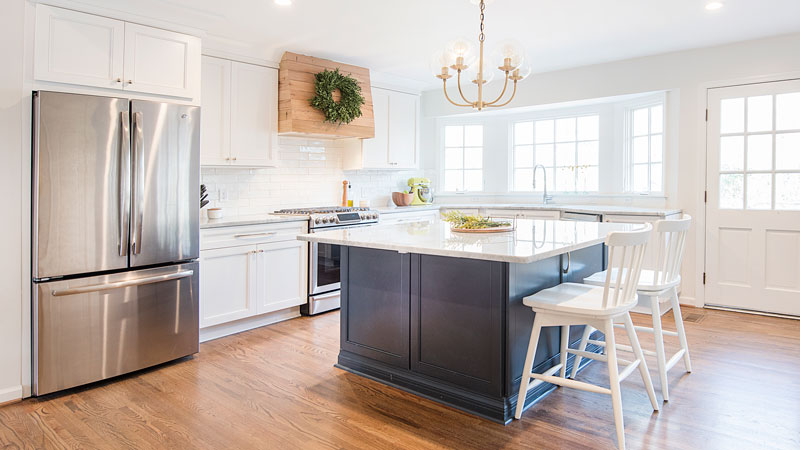 A square maritime blue island and sleek reclaimed red oak vent hood accent this classic white kitchen with modern flair. It now occupies both the space of the former kitchen and its breakfast nook’s bay windows that overlook the backyard. The white subway tile adds another classic touch, while the brass pendant light fixture with glass orbs adds another modern element. 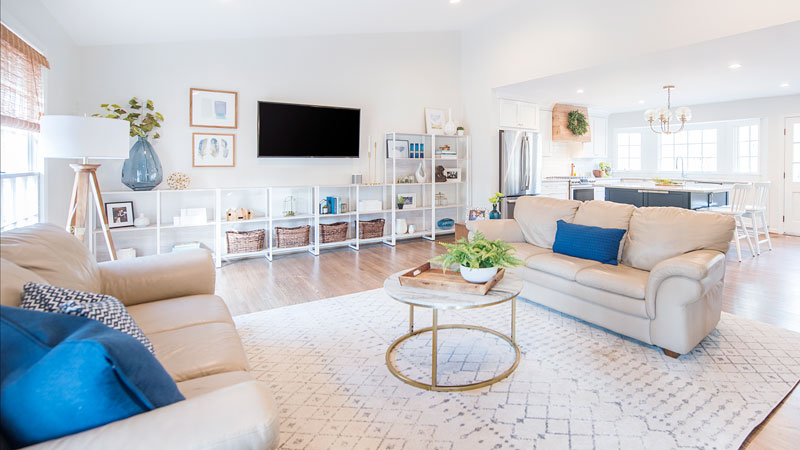 Eliminating the walls dividing the living area from the kitchen connected the spaces and allowed light to flow through the house from back to front, and the newly vaulted ceilings make the space feel even more open. 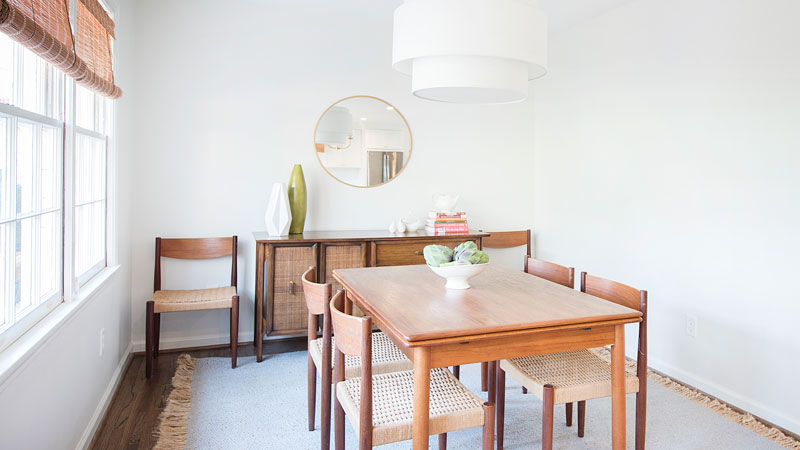 The white double drum pendant light from Rejuvenation and teak wooden dining table, an antique that belonged to their great-grandparents, show off Jennifer’s preference for modern style and timeless design. 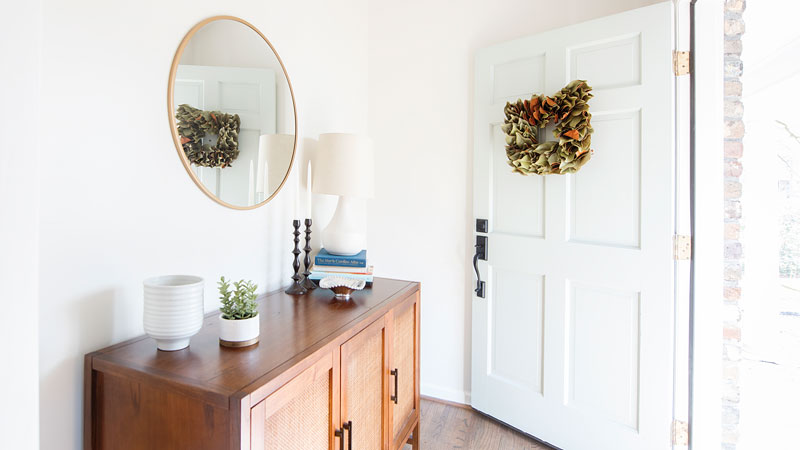 This entry space added in the renovation in front of the new staircase creates a place for pause upon entering the home. 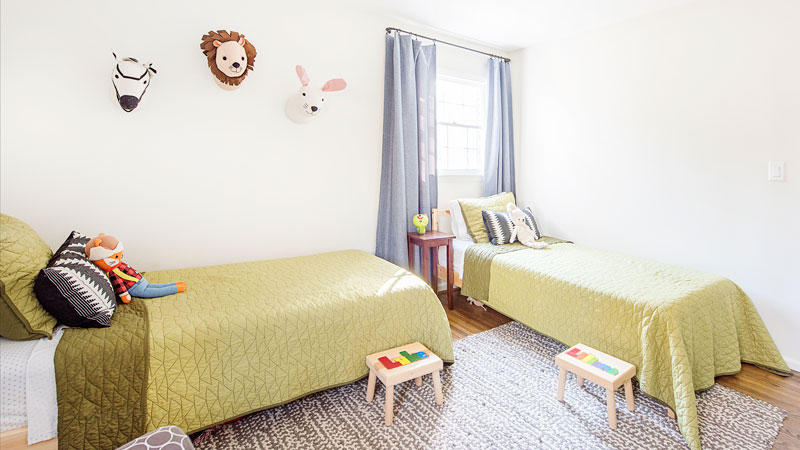 This boy-girl shared kids room focuses on happy details and a gender-neutral color palette—which turns out to be anything but neutral and plays up the fun by mixing teal, indigo, olive, gray and white, with pops of pink. 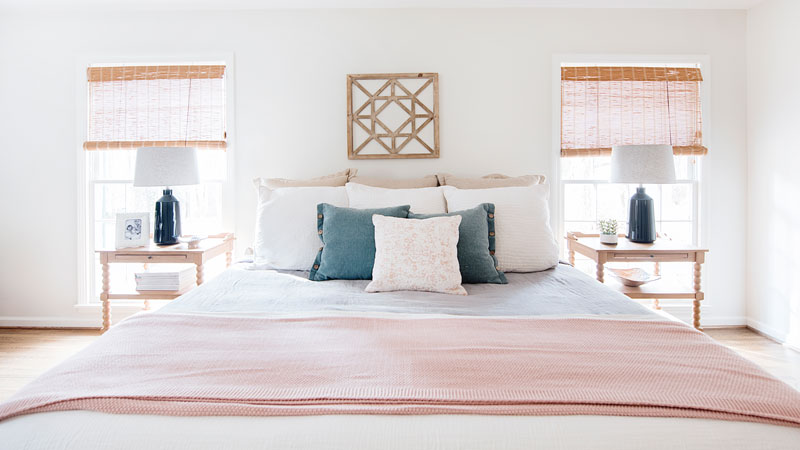 The new master gained more space and a sense of balance with its shifted footprint. Removing hallway access to the bathroom allowed this the master suite to become a private retreat for the couple too. 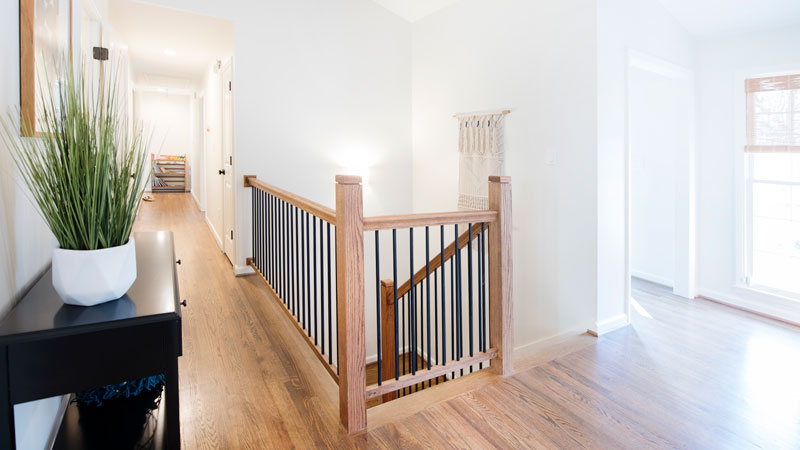 These black iron and oak switchback stairs leading from the hallway to the basement rec room create a stronger connection between the two floors that make both feel more spacious. 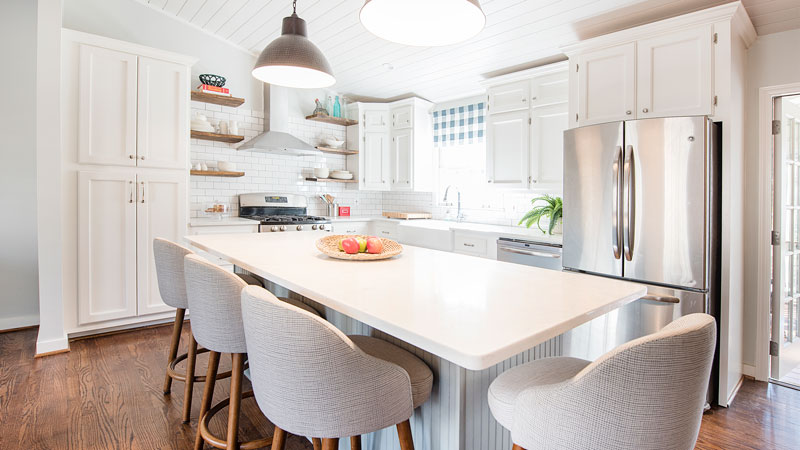 Knocking down the wall between the living room and kitchen and vaulting the previously low-hanging ceiling opened up this hardworking area into a bright and happy family space. A large island now anchors the kitchen, which is surrounded by classic white cabinets and subway tile, a set of floating shelves and stainless steel appliances. A shiplap ceiling adds just the right amount of texture and interest to the space. 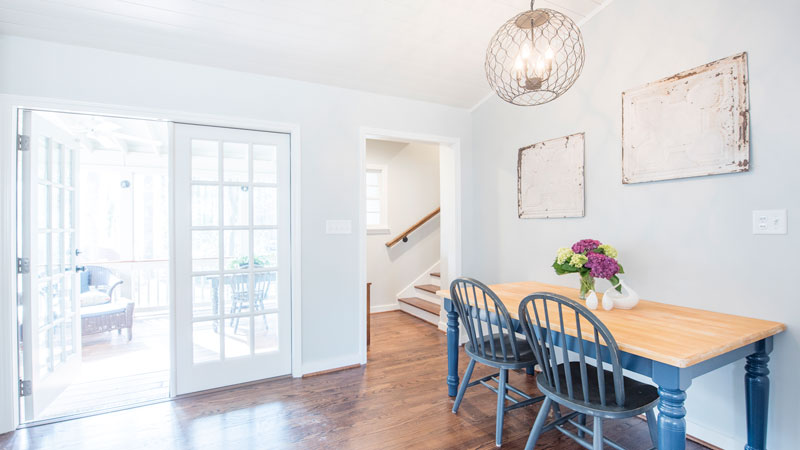 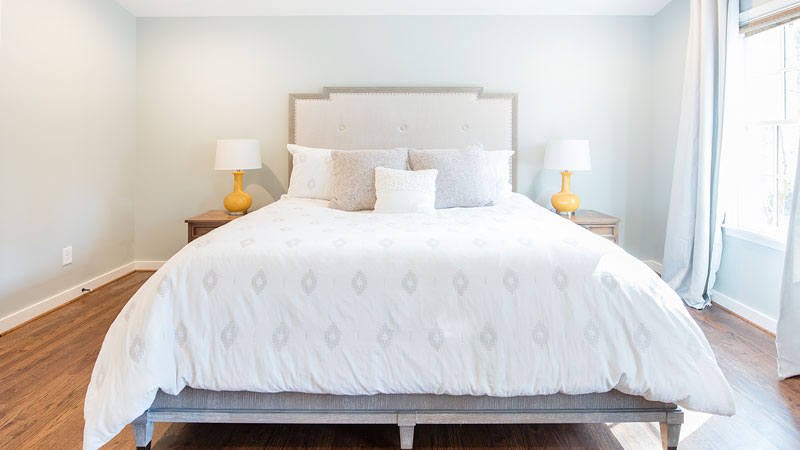 Where a king-sized bed stretched nearly from wall to wall in their previous master, the same bed now rests with plenty of breathing room for a desk and more in this Benjamin Moore Tranquility blue bedroom, now 250 square feet. The Tomlinsons also gained a large walk-in closet, a welcome upgrade from scattering their clothing throughout several different closets in the house. 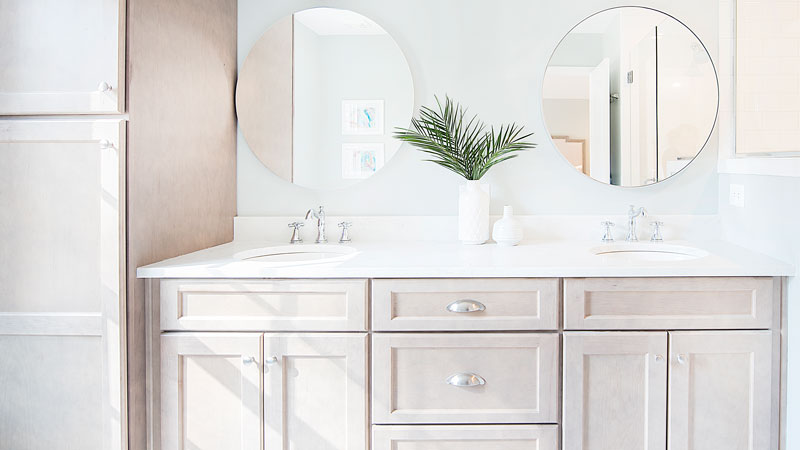 This bright and airy space is now 100 square feet with a spacious walk-in shower, a significant increase from the former master bath’s original 5-by-8-foot dimensions. The cabinets are a light graystone stained wood with satin nickel hardware that corresponds with the pewter dome shade sconces above, and the counters wear the same white quartz used in the kitchen and on a floating bench in the shower. 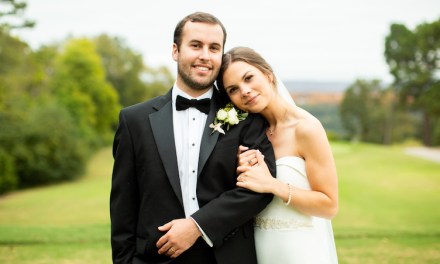 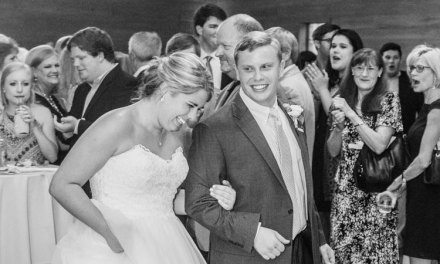 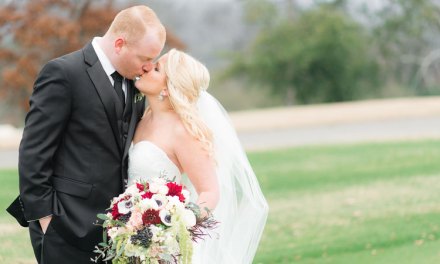 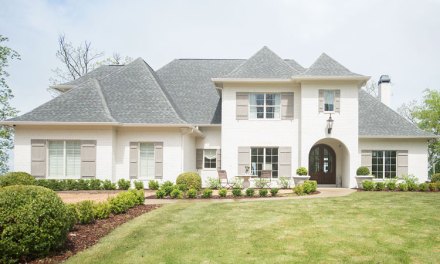