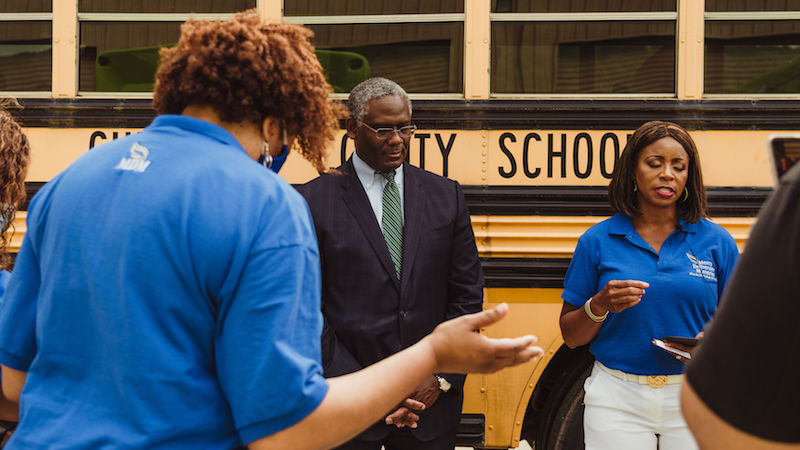 To the outside eye, it’s a yellow school bus. But to Toni Vines, it’s a grocery store, or it soon will be—once it’s been retrofitted with shelving and refrigeration and filled with fresh produce, frozen meats and staple goods. At that point, the mobile oasis will travel to communities in Birmingham that are considered food deserts and offer price points based on income level.

And that’s not all. The Mercy Deliverance Ministries bus will have a sister mobile health clinic operating alongside it, and community members will be able to sign up for a doctor’s appointments when they come for groceries.

The back story on Toni’s vision for Mercy Deliverance Ministries is a long one, all rooted in her own story and spiritual journey. And it starts where she grew up not far from Ensley and Wylam where the food bus will soon be stopping.

Toni was born to a 14-year-old mother in northwestern Jefferson County and raised by her grandparents. Growing up, she always had food to eat but also knew the taste of poverty full well. She’d visited cousins, one a neurosurgeon and the other a registered nurse, in summers, and saw another quality of life, and by the time she was a teenager had dreams to attend medical school. But they were derailed when she herself gave birth to a daughter at age 16.

“God’s grace and mercy showed up and I chose life for my first born,” she says today. “Giving birth to this new life inspired and anchored me…”

“With this little baby in my hands, I was determined to break this cycle of poverty, so she didn’t have to grow up the way I did.” 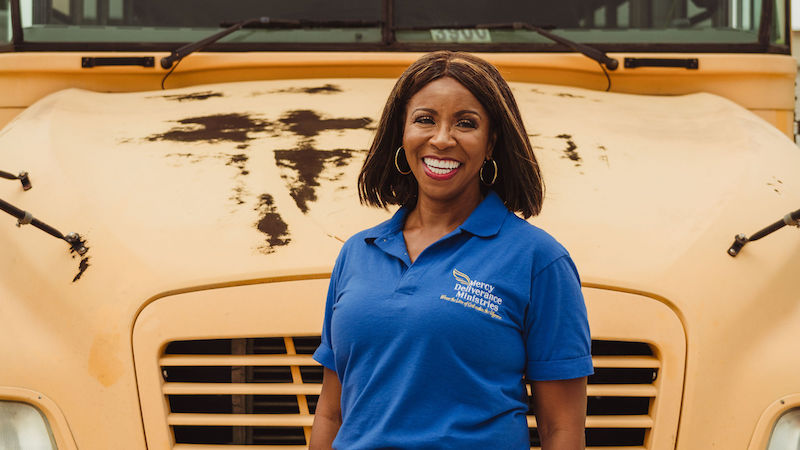 Not knowing her father and not living with her mother as a child, Toni had always asked why. Why were her grandparents her parents? Why did they live the way they did? Today she has more answers to those questions as she can draw parallels between her journey and that of Moses in the Old Testament of leaving the areas and culture she grew up in so one day she could come back to them. “You had to grow up in poverty so you could understand that system, and I would bring you out so you could go back and bring other people out,” Toni says of God’s plan for her life.

And indeed each step she took from age 16 on would ultimately lead where back to where she started, this time with a bus. “There’s a poverty mindset that has to be broken,” Toni says. “We are determined to educate and break that.”

After giving birth to her daughter, Toni would go on to finish high school, join the military, enter a marriage that would come to an end and work full-time in retail banking—what she calls a “seven-year cycle of consequences” that she would end at age 21. But the next season would bring a new marriage to her husband, Tim (which is currently in its 30th year), a nursing degree and career in an HIV/AIDS Infectious Disease Clinic, two more daughters, and “a continued cry to God for answers,” she says. 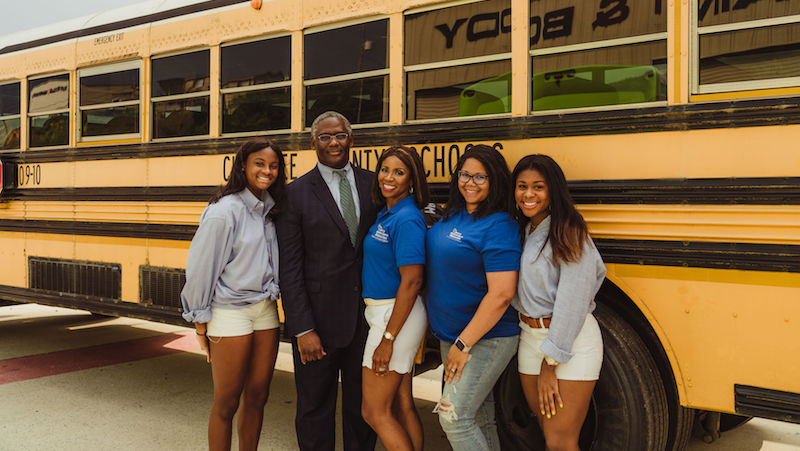 But before those two daughters were born, she began to write down ideas she says God was giving her in prayer, prayers that would sit in a journal until the end of 2018 when Toni says God told her to go find those prayers and start praying over them. That’s when her vision for Mercy Deliverance Ministries started to come into being. “Through prayer time and reading my Bible, He gave me what the logo and the colors will look like,” she says. “It was all birthed out of prayer and my relationship with the Lord.”

The name had come to her back in 2007 though during a Bible study. ”The Holy Spirit spoke to me that my passion was ‘deliverance’ and confirmed my gift of ‘mercy,’” she says. And her vison for the ministry is rooted in those words: “The concern for the physical as well as spiritual need of those who are hurting is covered by the gift of mercy. Those with this gift have great empathy for others in their trials and sufferings. They are able to come alongside people over extended periods of time and see them through their healing process. They are truly and literally the hands and feet of God to the afflicted.”

It was in Hawaii of all places, though, that she first began to actualize this vision. When her middle daughter graduated from Vestavia Hills High School in 2019, their family set out on a vacation to Spain only for a cancelled flight to lead them to Hawaii instead.

After a few days on Oahu, they made their way to the remote island of Lanai. “The whole week there I kept asking, ‘Why are we here?’” Toni recalls. “(God) had me up in prayer every morning. I didn’t understand what was going on.” But she’d start to see why she was there on their ride to the airport on the last day as their driver told them about of the plight of native Hawaiians, and not long after that Toni leanred about about Micronesian migrants in Hawaii who do not have proper access to healthcare, housing and federal benefits. Something about their struggles stirred her to dream up ways to provide healthcare and food via mobile vehicles both in Hawaii and back at home in Alabama. 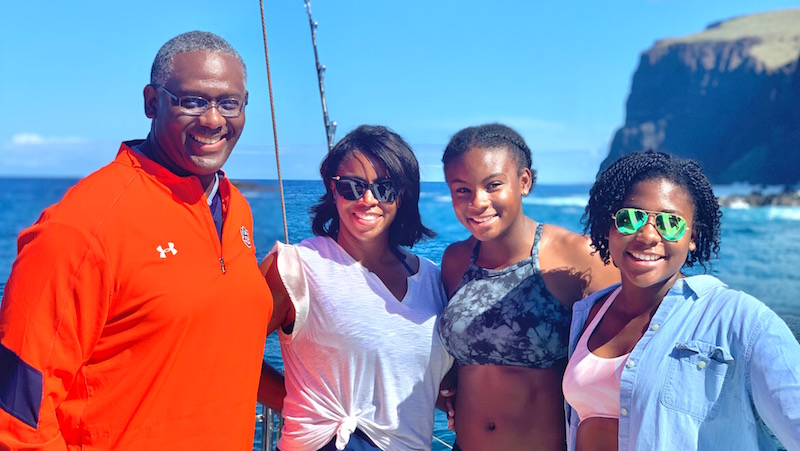 “There was something that struck my heart,” she says of that day leaving Lanai. “On the plane God started to speak to me and say I was going back to Hawaii for medical missions.”

But just when plans for ways to reach these people in Hawaii started to get underway, along came COVID-19. So Toni pivoted to focus back on Alabama first with her newly formed nonprofit, Mercy Deliverance Ministries.

While the bus was still under works, last fall Mercy Deliverance Ministries partnered with For-Word Christian Center Word Christian Center and Christian Fellowship Church—two churches she plans to partner with for the mobile food and health buses as well—to distribute food boxes in the areas the bus plans to serve. They’ve also worked with the American Heart Association to form a new partnership between Tuskegee and Auburn Universities to provide scholarships for students earning professional degrees in the biomedical and health sciences—just as Toni had dreamed of and later did.

In addition to those efforts, Toni has found a program that she wrote as a nursing student to teach girls like herself and her mother about high risk contraception—but more than that, to teach them their value and worth. She sees this being a part of the ministry along with financial education as well.

Over in Hawaii MDM has sponsored a tiny house that has now been constructed through Homemade Hawaii, a nonprofit that provides assistance to address homelessness, and they have plans for more ministry work there as restrictions related to the pandemic start to lift.

From food to health care to education, the threads that tie Mercy Deliverance Ministries’ vision to Toni’s own story run deep, and she’s quick to tell you that the theme of her journey has been prayer. “There has not been one tear that I have cried that (God doesn’t) use to help somebody,” Toni says. “He wastes nothing if you will trust him. Everything I have been through he plans to use, but I have to listen and trust and obey.” 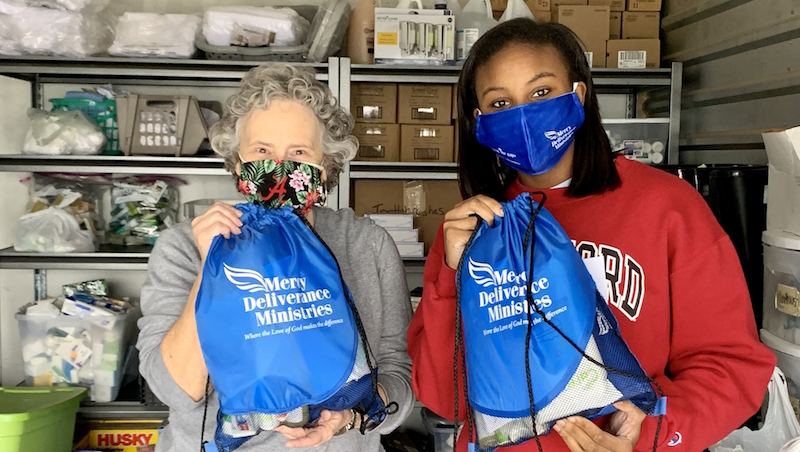 Get Involved with MDM

Volunteer. Help provide fresh food options and health and wellness services to those in need. Find their volunteer application form on the website.

Donate. Often people have a heart to serve, but not the time. A gift can express your values, heart, and compassion to serve others.

Corporate Sponsorships. If you are a corporate business and feel that your company values align with the mission of Mercy Deliverance Ministries, they’d love for you to partner with them through corporate sponsorship. 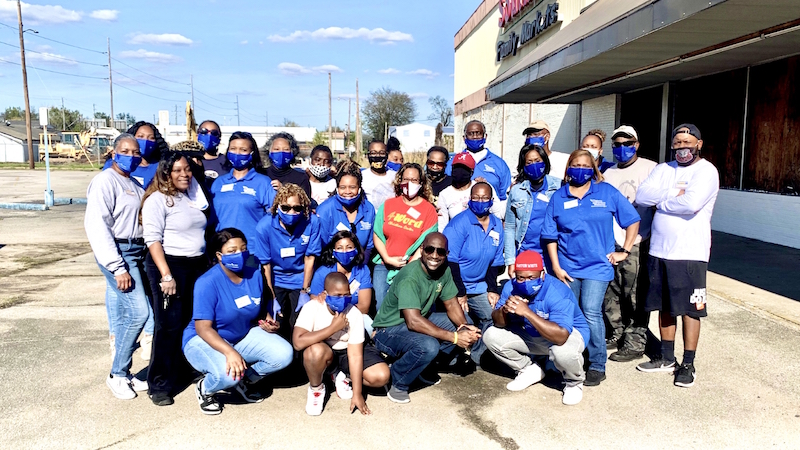 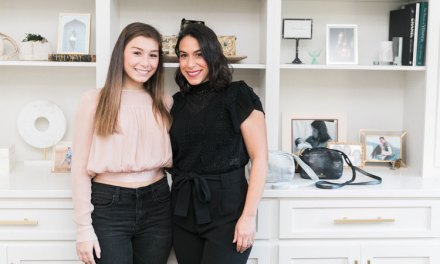 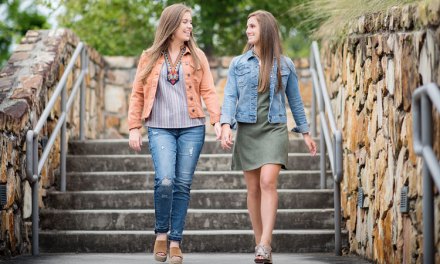 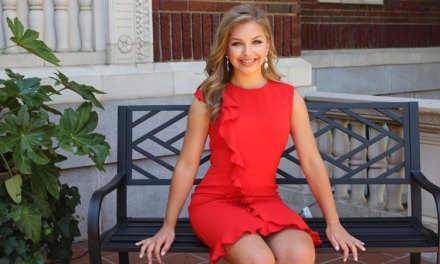