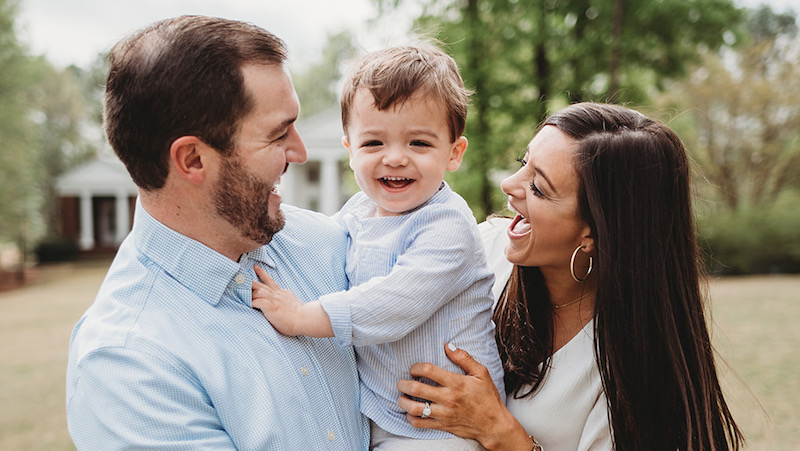 Even though he only lived two and a half short years, Brayden Andrew Moore made quite an impact on those around him. From birth, Brayden charmed everyone he saw with his smile and passion for life. As his father, Andy, puts it, Brayden had an innate ability to make people smile and add joy to their lives, and he greeted people with fist bumps and high fives. Employees in every department of Publix and post office workers knew him, and nurses would fight over who got to care for him.

So it’s no surprise that he was the inspiration for his mom, Jenna’s, line of heat-press children’s clothing designs. “Would he like this?’ she’d ask herself. Jenna often photographed Brayden wearing one of her creations and would post it to her Instagram account, which helped launch her business. She loved the combination of being at home with her son while using her talents and interacting with other moms and customers. 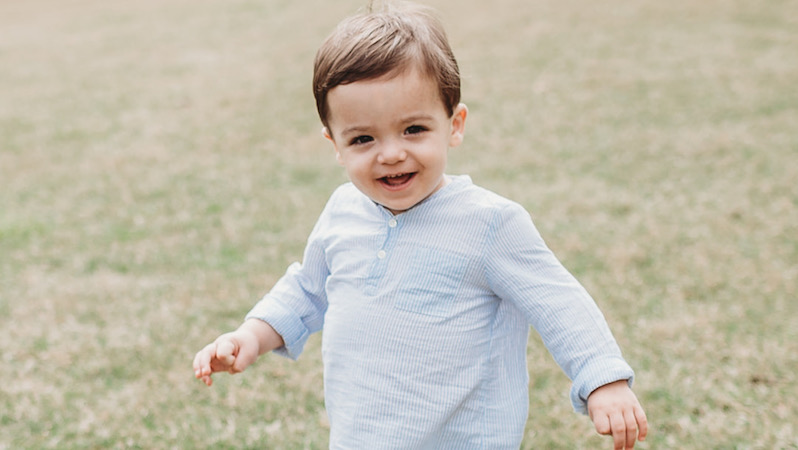 When he was nine months old, though, Brayden began having unexplained seizures. After countless tests, scans, MRIs and appointments with specialists, he was diagnosed with Moyamoya disease, an extremely rare condition where the arteries leading to the brain progressively narrow and blood flow to the brain is restricted.

Brayden was a fighter and continued to meet developmental milestones despite having to have frequent hospitalizations and treatments. Amazingly, he took his first steps three days after major brain surgery.

Jenna never imagined that she would have to give her son daily injections, constantly monitor medications, adhere to a regimented schedule and have frequent hospitalizations, but she rose to the occasion. “He made me who I am,” she says. “As a mom, you have to be strong.”

Given the circumstances, some mothers might be prone to be overly protective, but as Andy boasts, Jenna wasn’t a helicopter mom and operated very differently. “She let him have freedom to interact with other people, which gave him and them joy,” he says.

As time and treatments went on, doctors found that restricted arteries were also affecting some of Brayden’s other internal organs. This made his heart have to work harder, and he struggled consistently with high blood pressure. “He needed a marathon runner’s heart, not a body builder’s,” Andy says. “It was just one thing after another.”

Jenna and Andy say they were blown away by the doctors and nurses at Children’s of Alabama who became like family and loved and cared for Brayden as if he were their own child. With that in mind, the idea to start raising money to help them be able to serve and help other families came to the couple naturally.

The Moores began in a small way through a Facebook fundraiser on Andy’s birthday. So many people got involved that they raised more than $4,000 for the Brayden Andrew Moore Fund at Children’s of Alabama. They have designated that monies from the fund be divided out among three departments that especially cared for Brayden: cardiology, nephrology and neurology.

But despite the best care that medical professionals were able to offer, ultimately, the toll the disease took on his heart proved to be too much, and Brayden passed away on October 29, 2019, at just 2½ years old.

In lieu of flowers, the Moores asked for donations to Children’s Hospital of Alabama and Moyamoya research. They were blown away by the generous response from family and friends.

“After thinking through everything that happened, we realized God chose us to be Brayden’s parents, and we wanted to share his story and the impact he had on others,” Andy says, “We had spent months up at Children’s walking the halls and watching other children and families who don’t have the resources we have. So, we kept raising funds in his name for Children’s Hospital.”

Family members and friends have helped the Moores celebrate and remember Brayden’s life in many ways. In April 2020, Jenna’s sister helped organize a 3-mile walk on what would’ve been Brayden’s third birthday. Martin Advertising, where Jenna used to work, organized a sponsorship for the fund as part of the BHAM 26.2 race series benefitting Children’s. 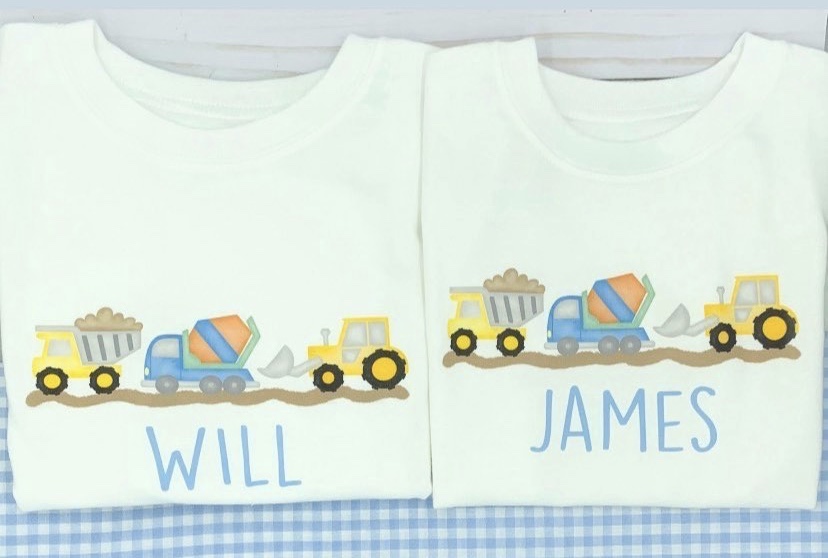 Other friends thought outside the box with a tangible way to touch other patients at Children’s in Brayden’s honor. In July, they surprised the Moores by donating  book carts to be set up at Children’s of Alabama and filled them with new copies of Brayden’s favorite books to give out to other patients (see more details on that in the sidebar at the bottom of this article).

Then, in August this year Children’s helped the Moores sponsor a golf tournament at Greystone Golf & Country Club in honor of Brayden to benefit the hospital. At press time, more than $70,000 had been raised through it.

“We’ve been blown away by our incredible support systems,” Andy says. “And all of this even during a pandemic. The outpouring support from people we know and those we don’t even know speaks volumes for how a 2½-year-old child can affect others in such a short amount of time.”

Brayden’s full name was Brayden Andrew Moore, so his friends and family often called him by his initials, BAM. But more than that, the Moores say BAM makes a statement about the effect their son had on others. They use #BAMStrong for fundraising, remembering their son, and just pressing on in life themselves. The Moores often remind themselves to “Live like BAM,” and it’s become a mantra for others too.  In fact, a friend of Jenna’s designed a special logo of angel wings with a tiny heart and halo to represent Brayden and to remind others to live as joyfully as he did. 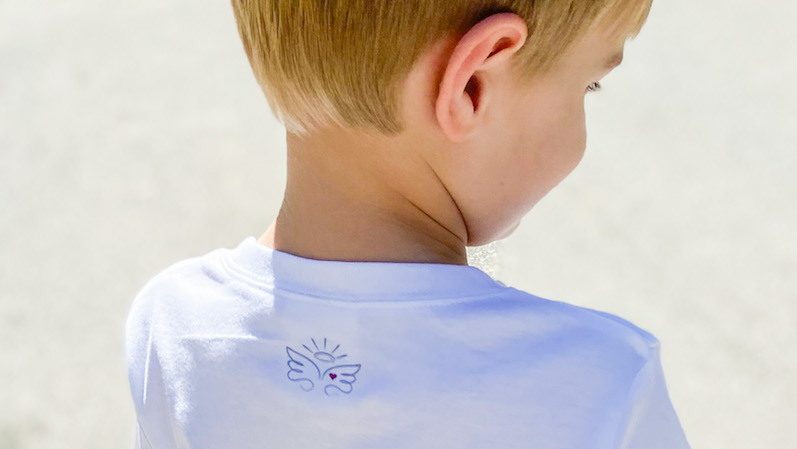 Before long, those angel wings would find their way back to heat-press designs too. Jenna had put her design business on hold when Brayden passed away, but after a few months, Andy encouraged her to start back up. “At first, making kids’ clothes was the worst job for me even though I missed it,” Jenna says. “I decided to continue to do it because I needed the creative therapy for myself and also knew it could be another way we could raise funds for Children’s.”

Today a portion of the proceeds from every one of Jenna’s sales goes to the fund at Children’s. “I’m not going to stop. If we can help one child or one family not have to struggle as much or have as much heartbreak, that’s what it’s all about,” she says. “I decided to re-engage and tie it all in with Brayden.. I started this for fun, but it’s turned into more than just a side business—it’s a passion.” Even though it takes more time and effort, Jenna puts Brayden’s angel wings logo on the back of every T-shirt she sells as a reminder to herself and others. 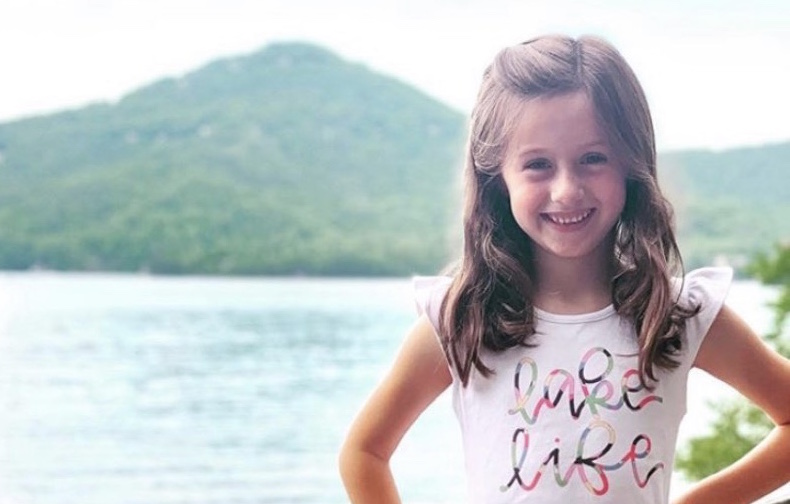 Customers often take photos of their children wearing Jenna’s designs and will send them to her. At first, seeing the images was painful for her, and even now when she works on a 3T shirt, the size Brayden would be wearing, she gets teary. But, in the end, the work brings her fulfillment and helps her keep going, and she loves seeing others enjoying her designs.

In the midst of grieving, healing, fundraising and pressing forward, the Moores found out they are expecting their second child, a daughter who they plan to name Holland Bray, after her big brother and guardian angel. Jenna was surprised when she found out her due date: October 29, the day Brayden passed away.

“This date symbolizes for us that we can be happy again,” Jenna says. “Although she will never be able or expected to fill the pieces of our hearts that are missing, she is already providing our hearts with love and we are so grateful to have her.”

Find Jenna Moore Designs on @jenna_moore_designs on Instagram. You can donate to the Brayden Andrew Moore Fund at Children’s of Alabama at give.childrensal.org/bamstrong or bam-strong-memorial.webnode.com. 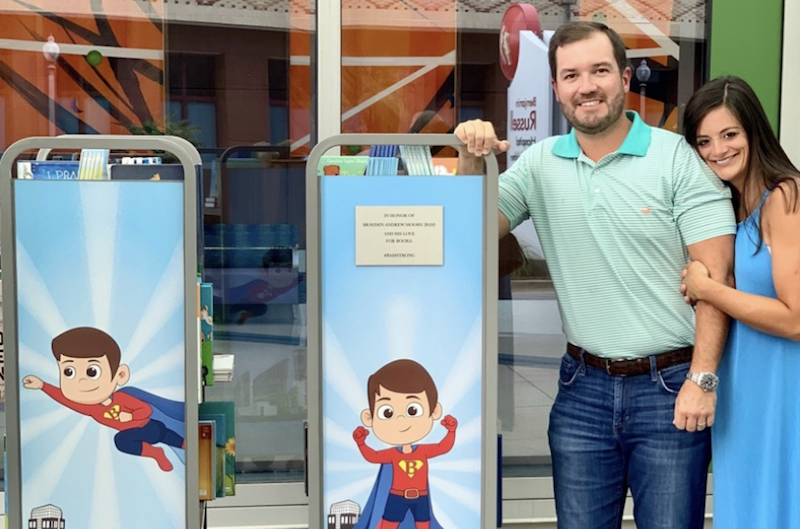 Brayden Moore loved books and being read to by his parents, so in July friends and family surprised the Moores by starting an ongoing program called Brayden’s Books. Two carts filled with nearly 500 books now roll the halls at Children’s of Alabama, and children can keep titles off the cart. Jenna says their hope is to keep these carts replenished so that any child who comes through the hospital can have access to books and enjoy reading just as Brayden did.

#BAMStrong is stamped inside each book’s cover as a reminder of Brayden’s legacy and story for any child or parent who reads the book. Many of them are Brayden’s favorites: All About Trucks, I Wish You More, The Moon Sees You and Me and The Pout Pout Fish. Any new children’s picture books can be donated to the carts.

Children’s of Alabama can only accept new and unused children’s picture books that are shipped directly to the hospital. Books can be shipped to: 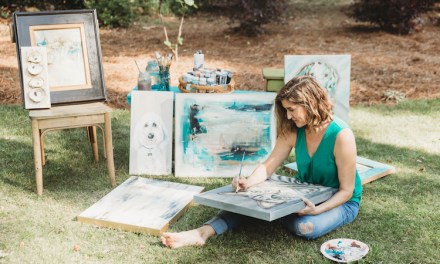 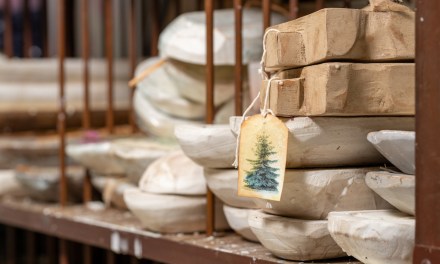 Spark of an Idea 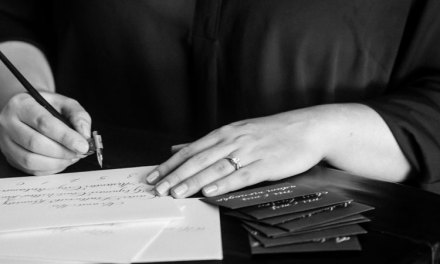